Damian Szwarnowiecki – a bronze winner of the World Cup in Prague

A young Polish judoka supported already for almost six years by TIM S.A. as the main sponsor, has numerous significant titles in his portfolio, such as European Junior and Youth Champion. Since last weekend, the awards won by the competitor also include 3rd place in the World Cup event.

Supporting young, ambitious athletes is one of the assumptions 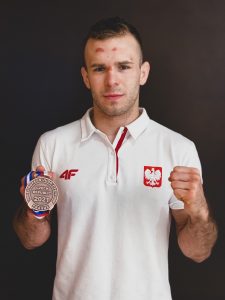 On Saturday, 27 February 2021, Damian Szwarnowiecki took part in the World Cup competition in the Czech capital, Prague. A total of 270 competitors from 23 countries took part in the tournament Damian’s category – up to 73 kg – involved 32 judokas. Our protégé won four out of five fights (with the representatives of the Czech Republic, Finland, Moldova and Great Britain) – all before time.

This year it was the first international tournament Damian participated in. Another competition will, most likely, be held at the end of March in Georgia.

print
As part of our website, we use cookies to provide you with services at the highest level, including in a manner tailored to individual needs. Using the site without changing the settings for cookies means that they will be placed on your end device. You can change your cookie settings at any time. More details in our "The Privacy Policy" .
Accept